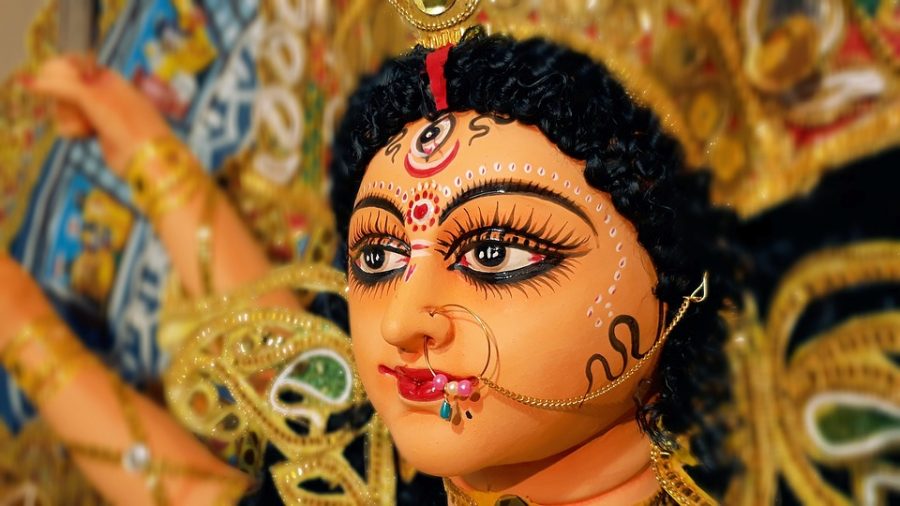 Maa Durga, the brave, courageous, and intelligent form of a strong lady.

Navaratri is a Hindu festival, it comes usually in the mid of October, and it is celebrating the 9 forms of Goddess Durga in 9 days. Nava means 9 in Sanskrit and ratri means night. Each form of Goddess Durga covers one day. Her nine forms are Shailaputri, Brahmacharini, Chandraghanta, Kushmanda, Skandamata, Katyayani, Kaalaratri, Maha Gauri, and last but not least, Siddhidatri.

“The beginning of spring and the beginning of autumn are considered to be important junctions of climatic and solar influences. That is why these two periods are taken as sacred opportunities for the worship of the Divine Mother Durga. The dates of the festival are determined according to the lunar calendar.” according to Hindu culture.

On the first three days, Hindu’s celebrate Durga, the vigilant one and celebrate by being strong through our wisdom, and being strong, fighting all problems throughout. We try to take the qualities of Durga, and be like Shailaputri: the courageous and composed, Brahmacharini: the one recognizing one’s true nature, and Chandraghanta: the alert one.

The next three forms represent Lakshmi, and Lakshmi is the Goddess of Wealth. Kushmanda: the creative, Skandamata: the skilled, compassionate, and intelligent, and Katyayani: the healthy relationed; are three forms of the goddess. We pray to be prosperous in everything we do and be happy in our lives. Lakshmi is considered to give us wealth, so we have everything we need.
The last three days represent Saraswati, and she represents Art, Culture, and Wisdom. We celebrate her through Kaalaratri: dynamic through deep rest, Maha Gauri: representing wisdom, and Siddhidatri: the perfect and enlightened. It gives courage to be confident in your art, and to always be passionate and motivated towards art and culture.

According to Lilleoru, “The nine manifestations of Maa Durga that are worshiped with fervor during Navaratri, are believed to lift divine spirit in us to help us overcome obstacles and get liberated from unnecessary qualities to be filled with new freedom and purity.”

In India, “Navratri is a very important and major festival in the western states of India: Gujarat, Maharashtra, and Karnataka during which the traditional dance of Gujarat called “Garba” is widely performed. This festival is celebrated with great zeal in North India as well, including Bihar, West Bengal, Madhya Pradesh and the northern state of Punjab,” Lilleoru stated.

Navaratri is an important festival in India, and places all over the world. We celebrate Navaratri by doing special dances, special prayers(pooja), and trying to be our best self.

Wishing all of you a Happy Navaratri.