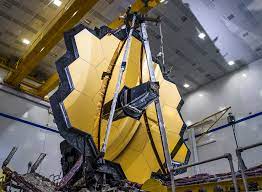 The James Webb Space Telescope, developed by the engineers of the Northrop Grumman corporation, has finished developing after over 2 decades of development, along with testing. It is a massively expensive telescope, costing over $100,000,000,000 dollars, but also comes with the power of being 100x more powerful than the Hubble Telescope.

Currently, our strongest telescope is the Hubble Telescope, which can view more than 100 Billion galaxies, and see more than 12 Billion Light Years, but soon enough, the limit will massively increase due to this new telescope.

Along with this, it is able to see the creation of objects, such as planets, something that would be too opaque for other telescopes to see, along with many other opaque and dim objects in space that normal telescopes cannot see.

“Anytime astronomers get a new telescope, it’s a kid in a candy store kind of thing,” said Eric Smith, the Program Scientist for the James Webb Space Telescope program, at Smithsonian.org.

Overall, the James Webb telescope will be a massive asset to Astronomy, and will be able to lead to many new discoveries.